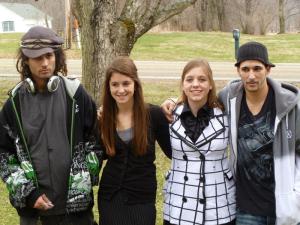 The final verdict on the cause of my brother’s passing was, as far as I can determine, a brain aneurysm.

The service was held at my mother’s house, since her frail health prevents her from leaving. My brother’s death broke her heart, of course, and she remained heavily sedated from just before she learned the news until after the service.

My youngest sister had flown in from California, and his ex-wives and two sets of children attended.

It was the first time I’d seen them in years. His first wife and two sons came in from Connecticut, where Terry had lived for several years. I hadn’t seen the boys, Ryan and Eric, for probably 15 years, and their mother for 20.  It was quite a shock seeing them after all that time, of course. Little skinny Ryan now towers over me, and is all dreaded and tatted, and trying to carve out a niche for himself in the world of hip-hop under the name Madecipha. His second full-length is dropping soon. His younger brother Eric had some tough times (growing up without a father can do that to you), but seems to have a good head on his shoulders.

It had also been several years since I’d seen his daughters, Morgan and Rachel. They and their mother Teresa still live in the Akron area, but had still lost touch with the Bond side of the family. Both appear to be well-adjusted young ladies.

The service itself was a bit depressing, and not just because it was a funeral service. The conducting pastor was recruited for the job by Terry’s second ex-, Teresa. He had never met Terry, but was doing it for Teresa and the girls. He started out by reading the obit notice from the Akron Beacon Journal, then followed with the basic request that anyone who wanted to say some kind words or share a memory about the deceased to please do so.

It threw the pastor off his stride. He didn’t quite know what to do, so he nervously told a few anecdotes abut his kids and implored us all to find God in some way, if not through religion, then through our own efforts…something along those lines. He was obviously making it up as he went along, since his plan of family and friends doing all the talking fell through.

The service was, obviously, pretty short.

After eating  the obligatory service brunch, everyone spread out, the kids going to my sister’s house to hang out with my nephew Greg, the adults going to their respective homes – I was staying with my youngest brother, so I went back there to grab a nap before collecting Cameron from Mel’s house and visiting some friends.

Determined to keep the family spirit alive, I set up a private Facebook group, where we all are exchanging messages (although as time goes on, the messages are fewer and fewer). I went back to Akron on Mother’s Day (it was the first time we were all together for Mother’s Day in many years), and Morgan and Rachel came to my sister’s and hung out for a bit. Cameron and I are headed out there this weekend for Morgan’s graduation party. Ryan, who’s interested in MMA, is headed to Philly next month to attend a match; we’re supposed to meet up and spend some time together.

So although there was a loss, there was also a gain. Hopefully the reunion will be long-lasting.