I wrote last time that I was involved with a little side project with some fellow students of the Developing Your Musicianship course offered by the Berklee College of Music through Coursera. That project is now complete, and I share it with you here.

First, a few notes from our producer:

In early May, a small group of us in our FaceBook study group decided to put together a little blues jam track, the idea being to have a little fun together irrespective of whether we were beginners or veteran musicians. We built a backing track within a couple of days and people were off.
Different skill levels. Different cultures. Different time zones. It still surprises me how easily this came together.
12 people.
11 different instruments.
18 days.
48 tracks.
2.3 GB of audio. (Mostly because of my inefficient workflow)
25+ hours of production, not counting the time we took to learn & perform our pieces.
10 minutes of bliss.

And now, the music, folks!

The songwriting project I’ve written about is on hold for at least another week.

I’m finishing up another Berklee class offered through Coursera, “Developing Your Musicianship”. Our final assignment is to record a minor pentatonic blues riff over a prerecorded backing track. That’s due Friday.

The Facebook group dedicated to the course is also working on a project similar to the Cafe karaoke project. Several of us are submitting tracks that will allegedly blend into a collaborative blues tune. I’ve committed to submitting a rhythm riff and a lead line, which may or may not be used in the final project. That, too is due Friday, to coincide with the end of the course.

Once those two projects are wrapped up, I should be able to return to my [untitled song].

While I take a small break in figuring out how exactly to build a drum track in GarageBand iOS, I thought I’d share a little project I was involved in.

In previous posts I’ve mentioned Coursera, a great resource for online learning. I’ve taken various music courses, and in the process made some friends that I wanted to keep in contact with after the courses were over. Turns out I wasn’t the only one. One enterprising student formed a Facebook page she christened The Coursera Cafe. Several of us joined and formed a nice little community for arts lovers.

Late last year, someone in the cafe came up with a wonderful concept. Several of us, from around the world, contributed vocals and visuals, which evolved into this video. It’s truly a testament as to what can be accomplished with the internet other than forum trolls and cat memes. How about a little peace, love and understanding? 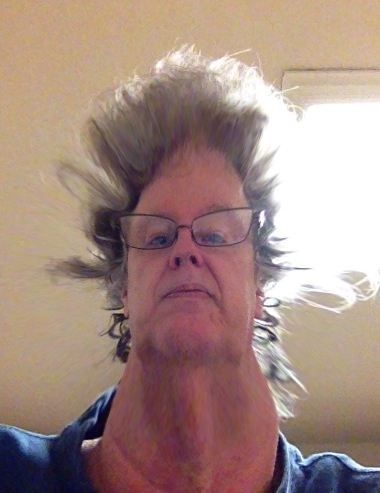 I recently changed my Facebook profile photo to the above work of art, which was realized with an iPhone app. Boy, the complaints I received! I got tired of listening to the squawkers, and after five days changed it to something generic. I didn’t think it was that bad.

Yes, it’s been a while since my last post; I’m sure you all have missed me terribly. Truth is, I’ve been fighting a severe case of Procrastination lately, and have only recently felt recovered enough to attempt to string a few words together into a coherent sentence.

I’m still feeling too weak to attempt an entire post on one subject, so instead I’ll throw out a few disconnected Random Thoughts:

• Only three more new episodes of Lost this season. Then I guess that’s it until, what – January? Thank goodness I’ll have summer and Christmas to distract me while I wait. One thing I’m not looking forward to during the Final Season is the amount of spoilers that will no doubt be floating around. Why can’t folks just enjoy the story as it unfolds?

• I’m seriously considering getting an iPhone when the new ones hit the market this summer. Burning questions: What do I do with my 16GB iTouch? Use the phone strictly as a phone and the iTouch as my .mp3 player? eBay the iTouch? What about all apps I’ve purchased? Can I move them to the phone, or will I have to repurchase?

• I need to do some unfollowing in Twitter. I’m sensing some Superior Attitudege by some Tweeters towards those of us who are using this social media to be…well, sociable. Some seem to think that Twitter should be used exclusively for entrepreneurial networking and selling, I don’t know…stuff. Unless you’re a Social Media Guru or Maven or Whatever, you need not apply. Like every enjoyable activity since kids first starting tossing pie tins back and forth, the money people are looking to make a quick buck on folks having fun. The new buzzword is “Monetize”.

• I started using MySpace, Facebook and Twitter before all of my friends. I guess I could promote myself as a Social Media Pioneer.

• Heh…those last two Thoughts may lose me enough followers that I won’t have to wade through my list looking for cutoffs.

• I am still of the belief that Bluetooth headsets should never be utilized outside of one’s vehicle. If you’re walking around Wal Mart wearing one, people are not looking at you thinking, “There goes someone obviously very important, and leading the pack in cutting-edge technology.”  They’re thinking, “What a douche.” Particularly if you’re walking around with your phone in your hand.

• I’m participating in a weight loss challenge at the MMA school I train at. I’m not leading, but I’m close. I really want a couple of tacos, or a Five Guys burger.

• Speaking of douches, I’m hoping Coach Dragon Slayer gets blindsided sooner than later. Preferably by someone he despises. I don’t care how much Jeff likes him (gotta love Jeff’s blogs, though).

That’ll have to do it for now; I feel another attack of Procrastination coming on. I have to go be apathetic for a while.

[Posted with iBlogger from my iPod touch]

Seriously? Update your Facebook status from your phone? Why on earth would that be necessary? Does the “Wireless Revolution” mean we think we’re important enough that we have to let everyone know what we’re doing every moment of every day?