I told the story in my last post how I lost out on a great deal on a Fender Telecaster, and how I satisfied my GAS with an Epiphone Les Paul Custom.

GAS has a nasty habit of resurfacing, though, and it wasn’t an eon before I was ready to adopt again.  It made things a little easier that Cameron was still taking lessons at the anonymous music store in the west end of town; for an hour a week I could sit and chat with the clerks, and play around with some of the pieces they were selling.

One guitar I liked playing around with was a well-worn Vantage VS600 “Witch”, a Japanese model manufactured in the early 1980s.

It played pretty well, and I liked the looks of it, and they were only asking $250 for it. So it became the fourth member of my collection. 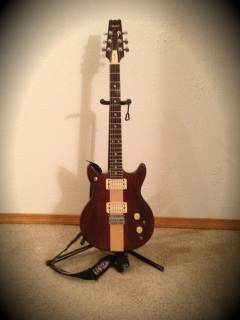 One thought on “Gee-Tar Four”