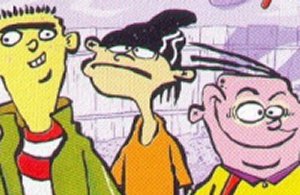 (One of summer’s guilty pleasures for me is the CBS reality series Big Brother. If you haven’t been watching this season, this post will mean nothing to you. Move along; there’s nothing to see here.)

Now that it’s a done deal (although anything can happen in four days, but I’d be very surprised if anything changes) and a Brigade member is going to win the game, my interest level is hovering around “E” (for “Empty”, not “Enzo”). I suppose the eventual winner will “deserve” the $500k, because he lasted longer than the rest of the jury and convinced them to vote for him, but I can’t drum up enough enthusiasm to really care one way or another.

Enzo should be the first of them to go. They all have Final 2 deals with each other, but the Meow Meow hasn’t done anything to justify giving him the $50,000 2nd place money. Other than winning one Veto Comp, what has he done to even earn the money BB’s paid him this summer, other than hanging out at the house? All I remember is him saying “I haven’t started playing this game yet, it’s time to start” several times a day for the past month, bragging about what a tough competitor he is, planning his post-BB future in show biz, taking credit for everything and taking a lot of naps.

I can’t back Lane because of his off-screen personality, which has been well-discussed in various online forums. Look it up, or take my word for it – he’s not a nice guy.  Some have suggested that he makes up a lot of his stories for effect, but I doubt it. I don’t want to say much more, because he’s liable to get 2 or 3 of his good buddies together, hunt me down, beat me up and dance with my girlfriend, and harm my cat just for fun.

I guess that leaves Hayden for me to root for, but I’m not happy about that choice, either. Until the past couple of weeks, he’s spent the summer relaxing with the Brigade, letting others do the dirty work. When Britney was trying to prevent Brendon from winning Veto, Hayden grabbed cash and a Hawaii trip and let Matt take the blame, because he knew he was safe. I suppose that could be considered good gameplay, but not by me. But out of the three of them, he’s worked at winning the competitions to keep himself safe the past couple of weeks, so I guess I have to give him that. If he’s in the Final 2, I can’t imagine him not winning. But like he said last night, he’s going to have to get himself there; nobody’s going to take him. Now that it’s on the line, he’s tough to beat, and winning out the competitions is something that should impress the jury, Brigade or not.

That being said, I doubt I’ll be wasting my time on the feeds during the next ten days, and certainly not after Britney’s gone (hey, you never know what can happen). Especially if CBS blocks Wednesday night’s endurance comp. When it’s just the three of them left in the house, the WBRB bubbles will be more interesting than watching that lot congratulate themselves for a week.

I wouldn’t even bother with the broadcast, except I’m curious about what’s happening in the Jury House. Is Vegas Red still pissed that Brendon’s out of the game? I think that was the reason she went over-the-top with Matt, not just because of the cameras, but because she had to have some outlet for her disappointment that she and her man have no BB money in their future.  If she’s smart (a stretch, I know), she’ll keep her distance from Ragan (especially after he finds out about Matt’s lie); if she tries rubbing it in that he’s out of the game and asks him mockingly what he thinks of Matt now, the Backyard Slapdown will look like the Paris Peace Talks. It will not end well for her.

I’d consider skipping the finale, too, except it’ll be on right after Survivor, so I’ll be sitting there watching CBS anyway. I’m curious to see the reaction when Ragan is revealed as the Saboteur, since everyone’s so sure it’s Matt. I’m wondering if Brendon will actually propose to Vegas on live TV, and what she’ll say to avoid committing without making both of them look like total idiots.

And I guess I’m looking forward to the whole America’s Favorite thing, which Enzo assumes is his. My druthers would be that J Chen will say that, “Oddly enough, nobody cast any votes this year because you’re such a lame group,” but that’s just a fantasy of mine (one of many that involve Julie, but that’s a topic for another time). I know that a lot of people will be voting for Brendon, but I can’t. He’s not my favorite anything. He didn’t play the game for himself (despite what he told Julie; even the last vote he cast was “For Rachel”), he was a poor sport when it came to losing comps, and I don’t want him to have the chance share any of it with Vegas, either. It’ll just postpone the inevitable.  Sorry, Britney haters, but I’ll be voting for her early and often.